A true trip through historic Florida would not be complete without its earliest beginning and if I had only one opportunity to show you the beauty of Florida it might just be this place.  Of the hundreds of beautiful places in Florida this place is the cherry and it is rich in history.  But it might not be where you think.  I'm not in St. Augustine, not yet, but I'm close.
Guana River State Park is located along A1A just north of St. Augustine.  Few places exemplify Florida's beauty the way this place does. It is historical preservation the way nature intended it and it is as close to pristine as I've seen. For those of you who are history buffs a 1592 account by a Spanish historian has led present day historians to believe that Guana River was the site of Ponce de Leon's first landing in Florida but the precise location is still unknown.
According to the state of Florida within its (the GTMNER) 73,352 acres are beaches, sand dunes, salt marshes, mangroves, tidal wetlands, tidal creeks, oyster bars, estuarine lagoons, maritime hardwood hammock, freshwater depression marshes, pond pine flatwoods and shell mound forests. It is also an important calving ground for the endangered North Atlantic Right Whale. The Guana River State Park which is part of the GTMNER (Guana Tolomato Matanzas National Estuarine Research Reserve) is where I landed, me and Ponce de Leon. For me, what's most interesting about this place is its awe inspiring beauty. I think Ponce de Leon was inspired by its beauty as well since he named it La Florida or place of flowers.  It can provoke quiet reflection through a nature hike or kayak trip but it can also inspire the minds of a whole hoard of fourth graders at its research facility or one single eleven year old transforming the idea of snow angels into sea angels on its beach. You'll know when you see it that this is how it was meant to be.  You may even feel as though you've just discovered La Florida! 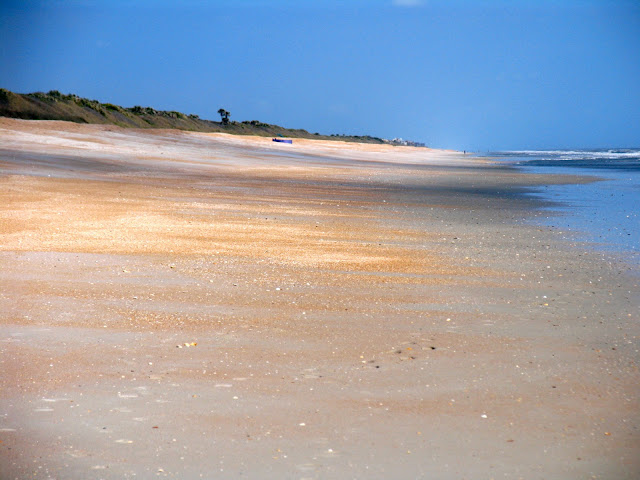 I live in Florida and it is absolutely true: every day you can visit places and feel as if you just discovered Florida again! It is an amazing place.
We run a vacation rentals company and as much as you want to share these places and suggestions to people, they only seem to have one thing in mind though: where is Mickey?! A shame...

Love this posting... Sometimes I like to Visit St. George Island, which is completely pristine, and visualize Spanish galleons anchored offshore with boats rowing through the surf. It could happen. :)

Did you take the pictures? I saved the last one to use as a desktop background. Beautiful!

Absolutely beautiful! Thanks for sharing.

I took all the pictures, as I do for most posts. Occasionally I'll borrow one but I try not to. Thanks for the complement. I'm glad you liked them!