Cool and Unusual Journey's Along the Rails

Anyone who's ever seen, "Murder on the Orient Express", can't help but want to take a journey by rail. Even without the obvious movie theatrics, there's undeniable romance linked with train travel. Probably not since Agatha Christie's novel, turned movie, has there been a more alluring train, until the Hogwart's Express. Now adults and children alike want to pass through the barrier at platform 9 3/4's. Yet, despite the lack of 1934 adornments of white gloved waiters, mahogany panels, and lamp lit windows, or the possibility of magical mischief and candy carts, trains are a very enchanting way to travel. It's hard to explain, but even the constant motion is a part of it. Believe me when I say, even though the romance of either "Hollywood" story takes a lot of movie magic, it isn't necessary in the real world. Train trips are wonderful! 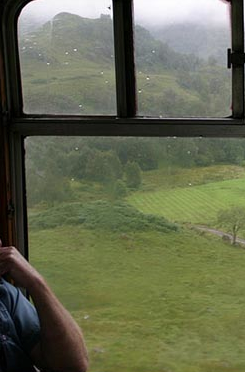 Once I hopped onboard for the first leg of my Eurail journey abroad, I was hooked. Compared to now, most of the trains I traveled on had an old world feel (with compartments very much like the HP train's). There were a few, however, where the chickens rode with the people, and seating was impossible to find. In some countries, train rides were more like an Indiana Jones adventure than one on the Orient Express, but even they had something of a romantic appeal. Suffice it to say, not all Eurail trains are  pretty and comfortable. Although I wasn't on a "train trip" per se, Eurail was a very exciting way to get around Europe. My point is, once you've ridden the rails you're hooked. I can't wait to do it again, in Europe and elsewhere. Of course, as depicted in these few shots, the scenery speaks volumes!

Let's Explore Train Travel
I'm not starting with the obvious, Eurail, simply because a small train station in England caught my eye and inspired these next few posts. Now I dream of going there, to Dent Station by train. So don't look for, or expect a pattern of logical sequence. There isn't one. We're about to look at train journeys and stops around the globe. It isn't the kind of ride that sees you squished between stranger side to side, and front to back, as you trudge home from the office, or the birds-eye view from the tiny window miles above. This is the kind of ride where you relax as you gaze out the window at the sweeping vista. As the train's rhythm warms you, stress falls away and you begin to relax as the journey unfolds.
Posted by Unknown