I love social media, if for no other reason than it allows us to explore and discover things through a multitude of options we probably wouldn't have discovered otherwise. More simply put, Social media instantly connects us with the world.
I was on Pinterest yesterday, which I love, and I found the great photo to your left. Naturally, I had to know more. Although it's a gem, it led me to another through a link to a website I had yet to discover called Fancy. This new website led me to others photo and fortunately to the next gem.
As a side note, Fancy is somewhat similar to Pinterest in appearance (both very appealing to those of us who are totally visual) only Fancy is about stuff and places. On it you can apparently "fancy it", buy it or book it. A great way to discover new things or another total time killer - LOL.

We have arrived in an age where the internet reveals solutions to our inquiries and entices us to explore the undiscovered. I'll admit, sometimes it's frustrating. We seem to want everything instantaneously! A side effect, I'm afraid, of its accessibility and speed is our ever growing impatience. However, if we are patient it is likely that just around the bend is a solution in the works. Letting the mind wonder through the maze of the internet is our planet's occupants addiction, now and for the foreseeable future. Whether driven by a purposeful pursuit or just meandering, we can't imagine living without access.
In my pursuit of all things travel, I found this boy and the elephant and had to know where this was taken and who pinned it. If it's not the pinner's original work it's something they've found. Fortunately, it was easy. The pinner's caption gave me where the photo was taken and her pinned photo's link led me to website where she found it and its Travel and Destinations browsing tool. This website, thefancy.com, was right up my alley and like an addict I had to discover whether this was a new source for travel finds.
In a few minutes I had my answer. I found a couple great new places, like Londolozi Game Reserve in South Africa and the Temple of Karnak in Egypt, but my favorite and a much more likely place for a visit in my near future, was a little gem in Florida the Post Card Inn. On further investigation I found Food and Wine had listed it among America's seaside escapes and according to Travel and Leisure, the Post Card Inn is,

"Hip, affordable and resolutely casual."
Situated on St. Pete Beach, the Post Card Inn has an interesting story. Originally a motel it was scheduled for a demolition that was fortunately averted. Sarah from Remodelista tells it well, "A few years ago, the neighborhood of St. Pete Beach, on the Gulf Coast of Florida, was up in arms when developers wanted to demolish the local motel, a fifties motor inn that later morphed into a Travelodge. The neighborhood won out, and after a heavy facelift, the Postcard Inn was created. St Pete Beach might not have the glamour of South Beach, but we like the inn's laid-back surfer vibe mixed with vibrant colors and vintage furnishings."
Another blogger, The Coolist, reports, "most (vintage) vacation spots have been dozed and developed, (but)...the Postcard has rehabbed this hotel to its original glory, yielding a vintage vacation spot for culture-minded travelers." In less than an hour I knew the Post Card Inn's story, had read guest comments and began spreading the word.
I could have just as likely discovered the inn on Twitter or through another blogger, as I have previously found others. My point? Social Media and the Internet are rewarding travelers and businesses, such as, the Post Card Inn now and for as far into the future as we can imagine (perhaps forevermore). Here, I've attempted to walk you through one such scenario.
Don't miss out on being the next place I or others discover. We the public, your potential guests, are always searching for gems and spreading the word. The value to your business is tremendous. It's time to "check in" to your Internet and social media opportunities and watch your branding grow. 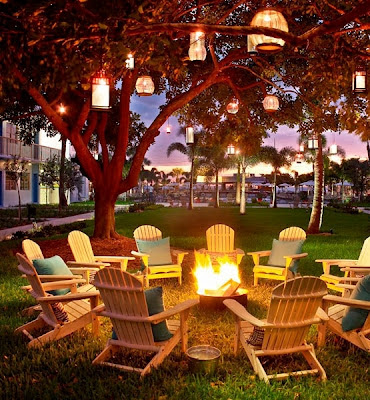 Don't forget to check out the Postcard Inn and spread the word about this St. Pete, Florida gem. Who wouldn't want to join in at this fireside where some guest from Thailand might be sharing a fantastical elephant story!
Posted by Unknown