So, you're tweeting. Dropping comments of up to 140 characters into the Twittesphere at warp speed (or so it seems) wondering, What the heck am I doing? Besides promoting your business with numbers (followers & following), what are the benefits? Well, the experts in social marketing told me tweeting was important, so I did it - like a sheep. On good days, especially early on, I was able to read about 1/2 of 1% of the tweets from those I followed if I stuck to my self allotted time frame of 15 to 30 minutes a day. And, like every good Twitter addict, I was watching my numbers. It seemed to be the point. Then I thought, OMG! Am I now participating in some sort of flash mob mentality; caught up in the fever pitch? Had I joined the Twitter cult? WOW! Am I that mindless? Where was the value in that! So, I asked myself is this good marketing or is it just a numbers craze? The answer is, yes. 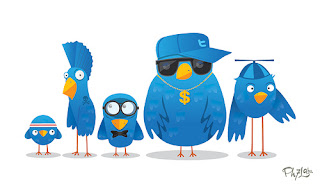 In many aspects Internet marketing is a numbers game, that is to say, there are benefits to numbers both in ranking and number of followers, and Twitter can get you numbers in a hurry. But it has to go beyond the numbers game to be really beneficial. Often we use social media without first understanding it. Frankly, it's all just happening too fast. Who has time for it all? But, that's precisely why the simplicity of Twitter caught on.* 140 characters done reasonably well, for no more than 15 - 30 minutes a day is doable and can get you some decent recognition. However, it is NOT mindlessly following or tweeting that will get valuable results. Obviously what I did at first was wrong, so I had to rethink the possibilities and the purpose. I did my Twitter homework. It revealed that simple, concise, worthwhile information has marketing value on Twitter. Then, and only then, the good numbers will follow; tweet relevant, good information and consciously follow, respond to and retweet relevant, good information.
So what do YOU tweet? At first tweeting is a very foreign activity. Very much like trying to communicate in a foreign country with text book knowledge of the language; it takes practice to be fluent. I like the simple way Tech N' Marketing explained tweeting:
What to write—
“What are you thinking?”
Are you reading an interesting article? Share it!
Cool video? Link to it!
A funny picture? Tweet it!
Share share share!
Cause there to be dialog.
That is what it is all about.

If I could add just a couple additional things to their simple "how to" explanation (considering we're talking about social media marketing) they would be:
Tweet daily
ONLY tweet and retweet about things relevant to your business.
Create a separate account for your personal interests. There you can talk politics, sports, fashion, religion or whatever, but not on your business Twitter page unless it's the business you are in.
Proudly brag about your business or profession
your facility, goals, accomplishments, products, offers, etc.

One last thought: you will inevitably miss a huge percentage of tweets and the opposite is true. Not to worry. No one is saying, good information can't be shared more than once and good tweets get retweeted. Within a short time you'll develop habits, then relevant patterns will emerge and it will begin to actually make some sense. Twitter is simply a networking tool. It is like dropping a rock in a pond - it will have a ripple effect. How far the ripple carries you is dependent on you. Tweet well and they will listen, follow and retweet.

*In all honesty it has gotten more complicated, but the simple premise is still there.