As part of the Appalachians the Smokies are among the oldest mountains in North America. The range is mostly located in the United States but extends into southeastern Canada. Divided into a series of ranges, the highest mountain of the group is Mount Mitchell in North Carolina at 6,684 feet, which is the highest point in the United States east of the Mississippi River. Mount Mitchell is accessible via the scenic drive known as the Blue Ridge Parkway. From the big animals like bears, deer, and elk, down to microscopic organisms, The Great Smoky Mountains have the most biological diversity of any area in the world's temperate zone and the Blue Ridge Parkway winds 469 miles and provides critical habitat for over 50 threatened and endangered plant species. It's an amazing place to visit in any season with lots to see and do. Although we did see some wildlife, deer and wild turkeys, our trip was about reminiscing, time well spent together, spectacular winter scenery and snow covered mountains. I have been in love with this part of the country since my parents first took our family there one summer vacation when I was 8 or 9. Most likely, just like my brother Bart who as a kid picked out his favorite football team because of the quarterback's name (Bart Star), I may have at first, fallen in love with these mountains because of Mountain Laurel and Laurel Falls but since those first days I can tell you through further exploration that there's no place on earth like the Great Smoky Mountains.

After just one day in the Smokies I started referring to a violin as a fiddle and started singing songs like Rocky Top. Not that I would have recently admitted to ever having known the words, suddenly they were crystal clear in my mind, "Good ole rocky top, rocky top Tennessee, ..." Maybe it's the fresh air or maybe it's the altitude, I don't really care, it was infectious! On the way there we naturally took the roads less traveled, stopped to play in the first snow and, of course, take photographs. We crossed the snow line in Georgia. Typically it does not snow in December in Georgia, North Carolina and Tennessee except maybe on the highest altitudes, but we began seeing snow in the northern part of Georgia. I'm blaming and thanking my daughter, Morgan. She prayed hard for snow and her prayers appeared to have been answered. According to Knoxville news media it was the first measurable Christmas snow in 17 years. ]The night we arrived in Gatlinburg, Tennessee we could not drive the car up from the office to our Tree Tops Resort lodging because of the steep climb and threat of black ice. We could have taken the easy way out and stayed in a condo down below, instead we left everything in the car and hiked the 1/8 mile to our cozy cabin. We woke the next day to 14 degrees, beautiful blue skies and lots of snow. After retrieving the car and holding my breath driving back up the mountain we dressed in everything we had headed out for adventure.
Now I've been to these here parts before, but let me tell you it was nothin' like I remembered! Gatlinburg and Pigeon Forge were not the quaint little towns of my childhood memories. I wasn't really expecting them to be, but the tourist meccas I found weren't what I expected either. Let's just say Morgan laughed when I said upon seeing main street in Gatlinburg, "If anyone tells me to have a magical day I'll shoot them." Once I got over the shock it started to grow on me, NOT! Truth is I avoided main street like the plague until Morgan's pleadings for tourist shopping and attractions finally wore me down. Honestly, for some people this has great appeal (judging by the throngs of people there), but it wasn't our intent or rather mine to be in this theme park setting. I wanted quaint crafts shops, wood carving, weaving, pottery and taffy not Ripley's, miniature golf and go cart racing, but alas, there was something for everyone. I just don't want every place I go to start resembling the Orlando area. One is fine we just don't need knock offs. I still have no concept of why there are any, let alone nine, Ripley's, in Gatlinburg. I'm guessing once Dolly World opened there were the usual "attached attractions" that moved in. I did not enter even one of the numerous Ripley's. Nine! Really? Luckily, there are mountains that prevent the theme park sprawl and in Gatlinburg it was contained to about a 3 mile stretch. After stopping Morgan from obsessing over all things that glow in the dark I agreed to allow her some time on "main street". Despite my grumbling about tourist traps we enjoyed the Gatlinburg area even with a little main street thrown in for fun. Among the bright lights we managed to find a micro brewery and some great shops and restaurants. Morgan loved the Chocolate Monkey confections shop. I loved the Smokey Mountain Brewery and the Park Grill Steakhouse. In Pigeon Forge we both loved the Old Mill Square. The actual old mill in Old Mill Square has been in existence since the early 1800's. A water-powered gristmill on the banks of the Little Pigeon River produced the meals and flours for early settlers and even furnished electricity for the town until 1935. It is the old authentic mountain town I was hoping for even if it appeared to be dropped in the middle of a carnival bordered by a six lane highway. Like I said, something for everyone. 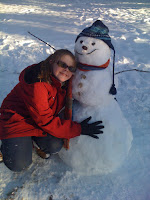 My favorite tourist attractions this trip were Cades Cove and Laurel Falls (both pictured) and some folks may find this surprising but there were only naturally occurring moving parts at these two attractions. OK, I jest! There were lots of kids (and adults) building snowmen and sledding everywhere we looked and every store in the area was sold out of sleds (Morgan had to borrow one).  While I may scoff at the "new" mountain towns I still recommend these mountains for an unforgettable adventure.