I wanted to do anything this year but a traditional Thanksgiving.  After loosing both my parents within the last ten months I don’t think I could handle traditional.  It would be way to sad.  Instead I’ve been looking for the perfect vacation to get away from tradition and make my daughter’s birthday very special.  It falls on Thanksgiving this year for the first time since she was born. 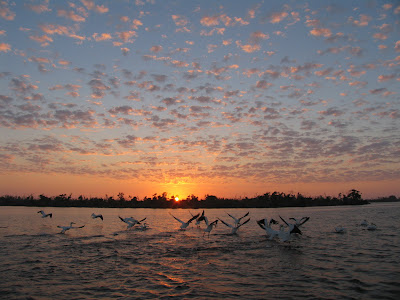 At first we looked at camping but it’s often still a little warm this far south at the end of November.  Winter is really the only time to go camping in south Florida.  Trust me on this one.  I once took family members to Cayo Costa State Park in June and although it’s a beautiful tropical island they’ve never let me forget it.  Nobody remembers the beach just the BUGzzzzz and the HEAT!!!!  I think they’re still plotting their revenge.  The relatives that is - not the bugs - the bugs were very satisfied.

I really don’t think she wanted to go camping on her birthday anyway.  “If we did”, she said, “I still want turkey, stuffing and pumpkin pie.”  Oh sure, cooking all that on a campfire would be great fun!  I think even Ree, The Pioneer Woman, would nix that idea.

It also needed to be within driving distance so after ruling out Disney (done that way too many times) or a beach resort (not quite different enough) we decided to investigate a cruise.  Wow, I have to confess.  I have never been on a cruise.  Well there was that time I won a three-day trip on a rust bucket.  I swear I think they sunk that thing as an artificial reef after our voyage so I’m not counting that as a cruise ship.  But seriously with all the boating/yachting I’ve done I’ve actually never been on a cruise ship.  I’ve always equated it to being in a condo where you could see the water but had no access to it.  I guess I’m such a water girl that I became a sort of anti-cruise snob.  I also thought, back then, that it was something old people did but now that I’m getting closer to being one, well . . . Seriously though, in my defense cruise ships have come a long way in the last couple of decades.

Now you are probably thinking that someone who’s writing a blog, her first blog, about travel based on her expertise on the subject ought not to write about something she’s never done.  It crossed my mind.  But the truth is I think blogging is about sharing and learning.  It may be filled with seasoned advice but it’s also about firsts, lasts and everything in-between and about how we arrived there.  There are lots of experts out there who will tell you how to do things.  I believe that it is far more valuable to exchange information than “follow the leader” in order to find what works best for you.  So I started with a new experience.

As with all things word-of-mouth is invaluable.  My mother-in-law has actually been on two cruises recently and although she is in the second half of her 60’s she is anything but old!  She can’t say enough about cruising and more to the point about the bargain cruise prices you can get in this economy!  Added to these reasons is the fact that our daughter has been begging us for years to book a Disney Cruise.  Sorry sweetie, maybe next time, your dad and I need a break from the Mouse.  Fortunately there are a multitude of cruise lines out there and you don’t need to look at rust buckets to get a deal.

Secretly I’ve been trying to find an excuse to drop my anti-cruise snobbish attitude without having to outright admit I was wrong.  I’ll do it, if I must, for the child(ren)!  Anyway, I did my usual immense search with multiple windows open comparing cruise lines, cruise types, cruise ships, destinations, opinions, and prices!!!  Yikes!  Sometimes I even scare myself.  What I found was there are definitely a lot of great deals out there on some fantastic trips!  Even as a virgin cruiser it doesn’t take much to find a great trip.  I narrowed my choices down to Royal Caribbean Lines.  Everything I read and everyone I talked to said they were the ultimate for cruising with kids.  Then I just needed to get the great deal and that’s when I hit the wall - the “holiday” cruise wall.  I was able to get a good price but I was a little disappointed it wasn’t a “great deal”.  Still, those of you who know me well know I managed to get a little something more.   By calling multiple booking agencies I found one that offered me an incentive to book through them.  There are almost always options and by spending just a little more time you can get a great trip for a decent price and a little something thrown in.  Did I mention I’m paying for this cruise with points?  I’ll blog more about that later.  The point here is if your dates are flexible you can get a fantastic deal on trips and cruises but if you have to stick to certain dates (especially holidays) don’t give up with a little effort you should be able to get a better deal.

I picked this itinerary because I wanted our first time to be about the cruise ship experience and it fit our time frame and budget.   If we like cruising someday (when we win the lottery) I hope to do the Galapagos Island Cruise I read about (about $5000 not including airfare).  But, but, but it sounded soooo incredible! (Picture my husband rolling his eyes.) Definitely not a deal!  However, there are lots of tips, trips and outings, budget or not, in-between now and then.  Hopefully you will find it useful (provided you haven’t heard from my family about the Cayo Costa trip debacle) or at least entertaining and I hope you’ll share your experiences with me.  I know I’ll value them.

If you enjoyed this first edition please let me know by commenting below and SHARING my blog with others.  I’ll write more in days, weeks and months to come.  There’s so much more we’ve yet to share.  I’ll even be blogging from the cruise.  Please share with me your best cruising secrets and I’ll share them with everyone!

Wonderful! Your off to a great start. I know a few cruisers I'll pass your blog onto and I'm sure your going to get some feedback. Can't wait for the next one! Liza B.

This is actually going to be a really cool blog. I love traveling as you know :) and I can't wait to see what you post next! Even though it is making me a little jealous ;) Also, what was the incentive they gave you?

Great Blog! Perfecto lead-ins. You are off to a great start. I can't wait to read the next posting.

I can't believe you're such a travel pro and I've actually been on a cruise before you. :)

nice blog, i like the part about winter outings in Florida, even up here in north FL we like to go camping and hiking in the colders months.

Love the blog. The one and only cruise that I have taken was incredible, but beware of the midnight feeding extravaganza (commonly called a buffet)! My favorite quote from John - "We started the cruise as passengers, but we were unloaded as cargo!" Can't wait to read your next blog. Coral

Hi Laurel,
Its a great pleasure meeting you.Reading this post I have very well understand your problem...so to suggest you some thing you can take your daughter for a awesome cruise trip making her b'day the most special of her life.
holiday cruises